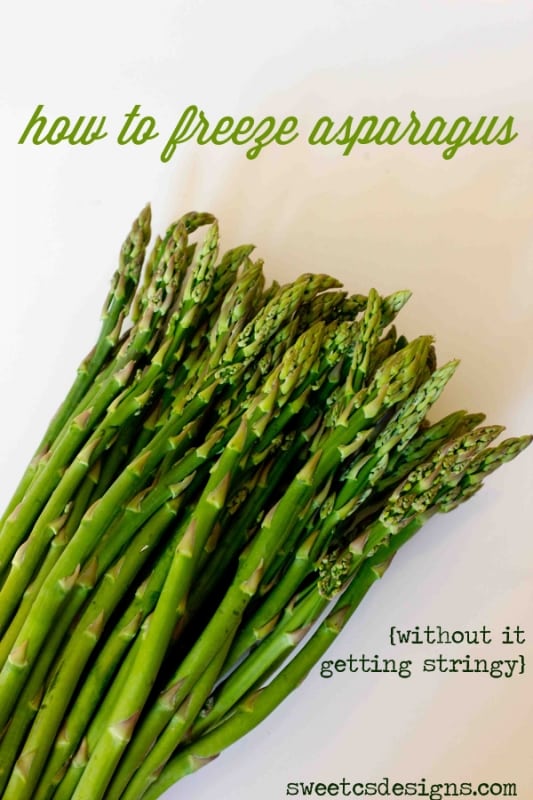 We’ve recently started doing some farm co-ops with local farms and Bountiful Baskets and have LOVED stocking up on fresh, delicious fruits and veggies. We’ve found some great deals and it has helped cut out food budget way down, and we’re eating lots more produce than we normally would because we have so much on hand.

While it has been great, we do sometimes end up with a little too much produce. Recently I ordered some asparagus through Bountiful Baskets (I got 21 pounds for the price of five bunches at a grocery store, what what!!!),

The only downside? Well, there is just so much asparagus a person can eat. I mean, we have been eating it at just about every meal, but still have a fridge full- even after giving a good amount to my in-laws.

So I had to freeze about half our haul. I’ve frozen asparagus before, with partly mixed results. It can freeze well, and it can also get really stringy when you freeze it- so I set out and found a great way to freeze asparagus that won’t get it too stringy.

And it is really, really easy.

First, start off with your asparagus.

Grab one spear, and fold it in half until it breaks into two pieces. That will be the area you cut off of the bottom to avoid the tough, woody like part. Go ahead and cut the bottoms off the rest of your bunch.

Next, bring a large stock pot of water to boil. In 1 pound bunches blanch the asparagus- but go slightly over what you normally would. Let the asparagus get very green- about 2-5 minutes depending on how hot your water is (it will cool significantly when you place the asparagus in the water- different cooktops will bring it back to boil at a different rate).

Remove the asparagus from the boiling water and dunk in a nice cool ice bath. Let sit for a few minutes so it is completely cool.

Remove and place in colander, shake, and try to remove any excess water.

Place in a large freezer bag and remove excess air, and freeze for up to six months.

When re-heating, sauteeing is the best way to cook it. I like to let the asparagus defrost in the fridge and then toss a bunch in hot olive oil to get some caramelized bits. I also like to dice it and add to omelets, frittatas, and pasta sauce!

What is your best fresh-freeze tip? Or your favorite Asparagus recipe?