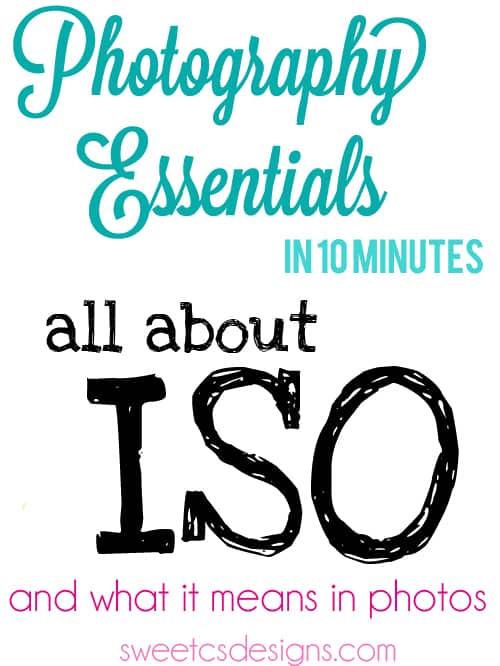 If you recently got a DSLR, or are starting to explore how to use it off of automatic, there is an abundance of settings, controls, and confusing words to learn to figure out how to take a picture.

Since I get a lot of questions about camera settings, I am going to take the next three weeks to give an intro into the three different settings you need to consider when taking photographs- ISO, Aperture, and Shutter Speed. The three of these work in tandem to produce a crisp, clear picture- and understanding each of them will help you get your perfect shot a lot faster.

This week, I am focusing on ISO, or film speed.

ISO is the setting you will change the least when taking pictures, so let's get it out of the way first.

I know what you are thinking, "I am using a digital camera. Why do I care about FILM??" Yea, it is confusing. But if you ever used an SLR, you'll remember actually picking your film's speed.

When I took photography in college, we had to do projects with all kinds of film speeds from fast to slow, and learn how to adjust the camera's settings to work with our film. When you were ready to move onto a different speed, you had to use up the rest of your film and replace it with something else. Thankfully, on a digital camera, we can just click a few buttons!

Why does film speed matter?

Remember in the 80's the hypercolor shirts were all the rage? You could put your hand up over a shirt and it would change colors in the sun because it was photosensitive.

Think of your picture as an image being captured on a piece of photosensitive paper. If you are in a darker room, you'd want paper that absorbed light faster, so you wouldn't have to have your image to stand still forever to capture it, right? That is basically your ISO- picking how fast your camera's "film" processes light. Faster speeds mean the camera needs less light to process your picture, because it absorbs light faster.

Knowing that, you'd think a high ISO was the way to go all the time, right?

Sadly, there is a caveat to high ISO settings. When your camera processes light faster, it can add a little "digital noise" or fuzziness. It makes pictures a little grainy. Boo. 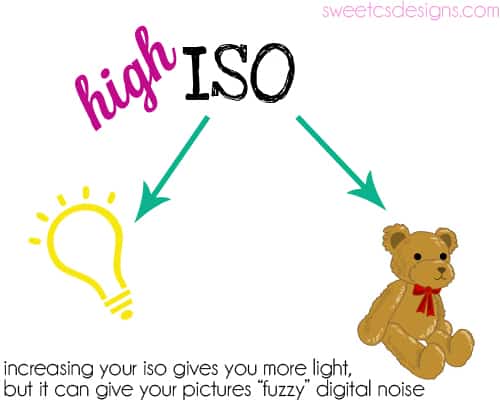 Fortunately, most digital cameras now can be used up to 800 without being so grainy it ruins a shot- so you can use your ISO to boost light a little bit when taking photographs, but usually, you will want to stick to the lowest possible ISO when combined with aperture and shutter speed (which we will get to in the next two weeks).

If you are photographing your kids first steps, a birthday party, or some other significant event and you can't get a non-blurry shot with your aperture and shutter speed, you can use ISO to get one by speeding up your camera's "film". A grainy shot is better than no memory of precious life events!

However, if you have a little more time, and can work in things like light reflectors, moving subjects to somewhere brighter, etc. for a craft shoot, you need to keep your ISO as low as possible.

I like to leave my ISO at about 200 so I don't have to think about it. That way I can focus on other settings and just forget ISO, since it is the setting you are going to change the least.  Then if I notice I am getting blurry shots, or it sounds like there is a long time between the camera's shutter clicks, I will up the ISO if need be.

Anytime you up your ISO, remember to turn it back down when turning off your camera so you don't have to adjust it the next time you pick up your camera.

Here's your homework (this week's is EASY):

First, let's find the ISO button. It is usually on top of the camera, next to the shutter button.

Next, check out your options. Most will have 100 ,200, 400, 800, 1600 or something in that range (they vary from camera to camera.) Change them around a few times so you get used to clicking the ISO button and changing speeds.

Finally, tab over to whatever is closest to 400. Since that is a decent speed for crafts/inside shots, we will start there when we go into next week's topic- Aperture!

Now that you understand ISO, try shooting on aperture priority mode, and change it around to see what ISO does for your shots!