A glimpse around Mtskheta, Georgia- one of the oldest inhabited cities in the world, and Georgia's Holy City.

The day before my brother in law and sister in law's wedding, we toured the ancient city of Mtskheta, just 30 minutes outside of Tbilisi. Mtskheta is one of the oldest continuously inhabited cities in the world- there are remains of buildings dating back to 1000 B.C., and churches dating to the 6th and 11th century that we got a chance to visit.

Mtskheta is where the old capitol of Tbilisi and the King and Queen of Iberia sat- and home to many important Orthodox stories, especially those of Saint Nino (you can read more about Saint Nino and her impact on wine as a cultural norm in the Georgian Orthodox Church here).

Our first stop was to the Jvari Monastery, which dates back to the 6th century and is still in operation. While getting to Mtskheta is easy from Tbilisi, it was odd winding the roads to the Jvari Monastery that sits high above the city. The road itself wasn't too harrowing (coming from someone who lives in Colorado and regularly drives winding mountain roads), but passing by wedding parties on a busy April Saturday was.

In the Georgian Orthodox Church, couples often head directly from their wedding ceremony to a monastery to have their wedding blessed. As we were visiting on a Saturday, we were in prime wedding time- so we were treated to a spectacle of wedding parties, some in elaborate puffy dresses and sky high heels, as well as men driving dizzyingly fast down winding roads, half hanging out of their cars and honking. It was interesting, to say the least! 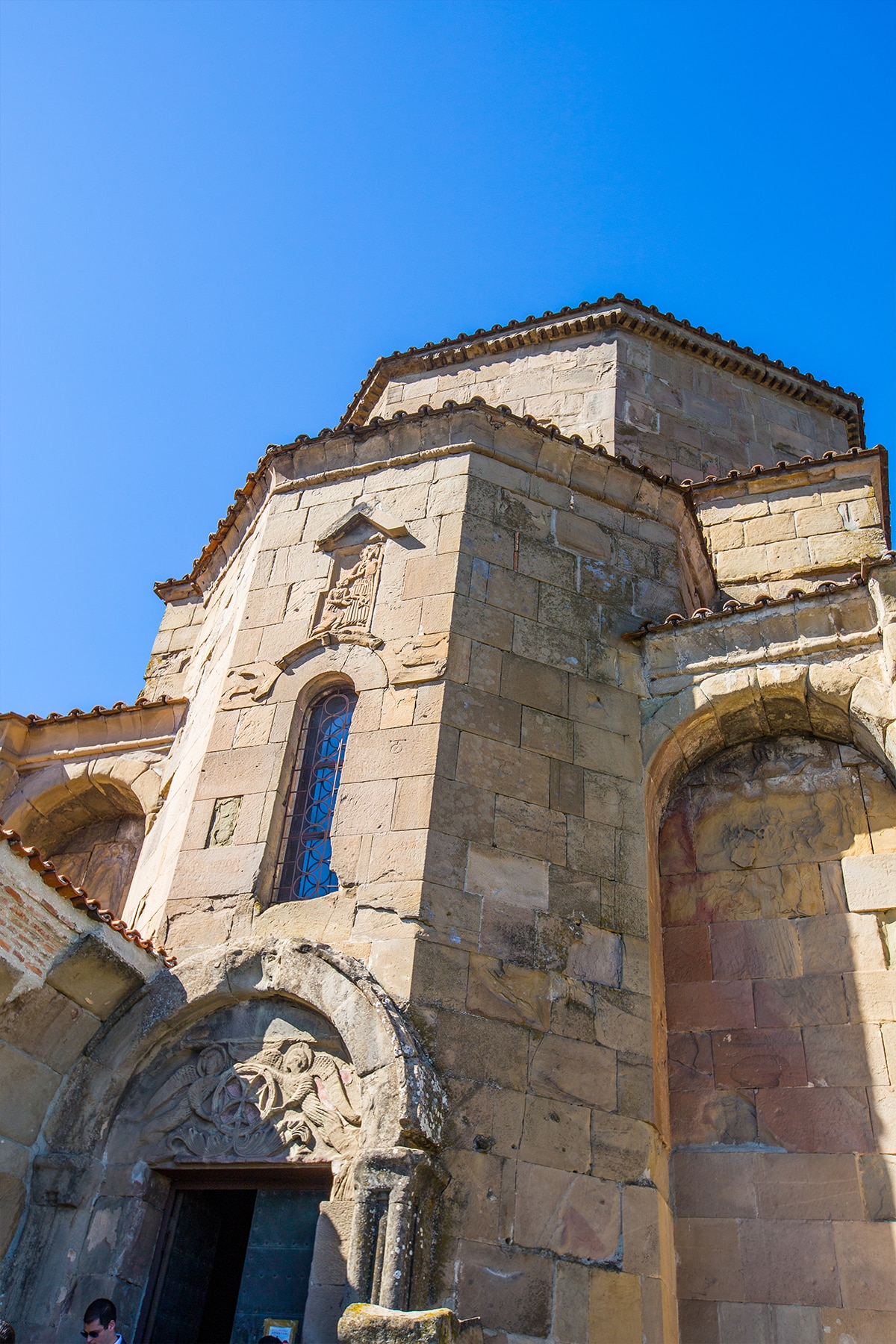 Once at Jvari, we took a quick peek inside and around the grounds. I didn't get a chance to take photos because there were so many people there for blessings- it was a bit like budging into a sardine can! If I was to tour Jvari again, I'd go on a weekday when there aren't as many visitors.

From Jvari, you can see the entire city of Mtskheta, as well as the rivers Mtkvari and Aragvi, where they combine and flow to Tbilisi. 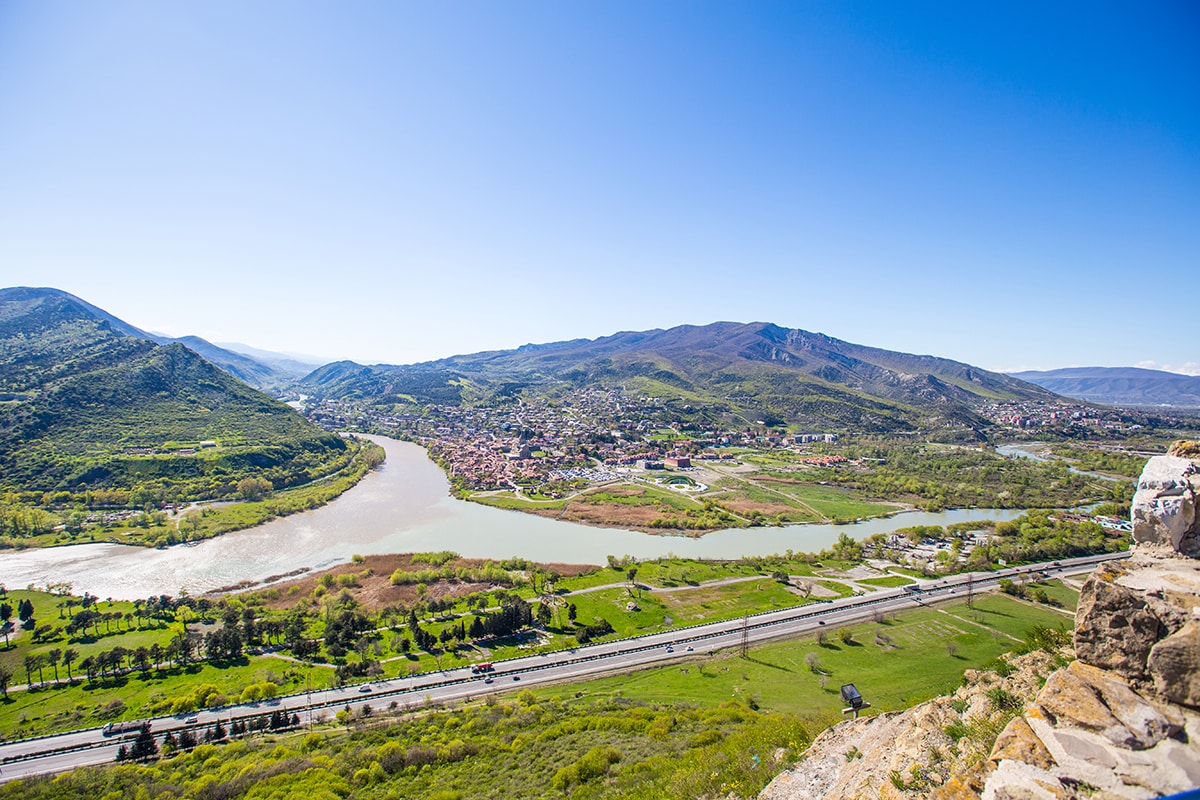 We headed down from Jvari, and straight to the Cathedral in the middle of town- the Svetitskhoveli Cathedral which dates back to the 11th century.

To get into Svetitskhoveli, you must walk through a walled maze of vendors selling holy items, icons, trinkets, coats, chacha, and food. There are a few restaurants as well. 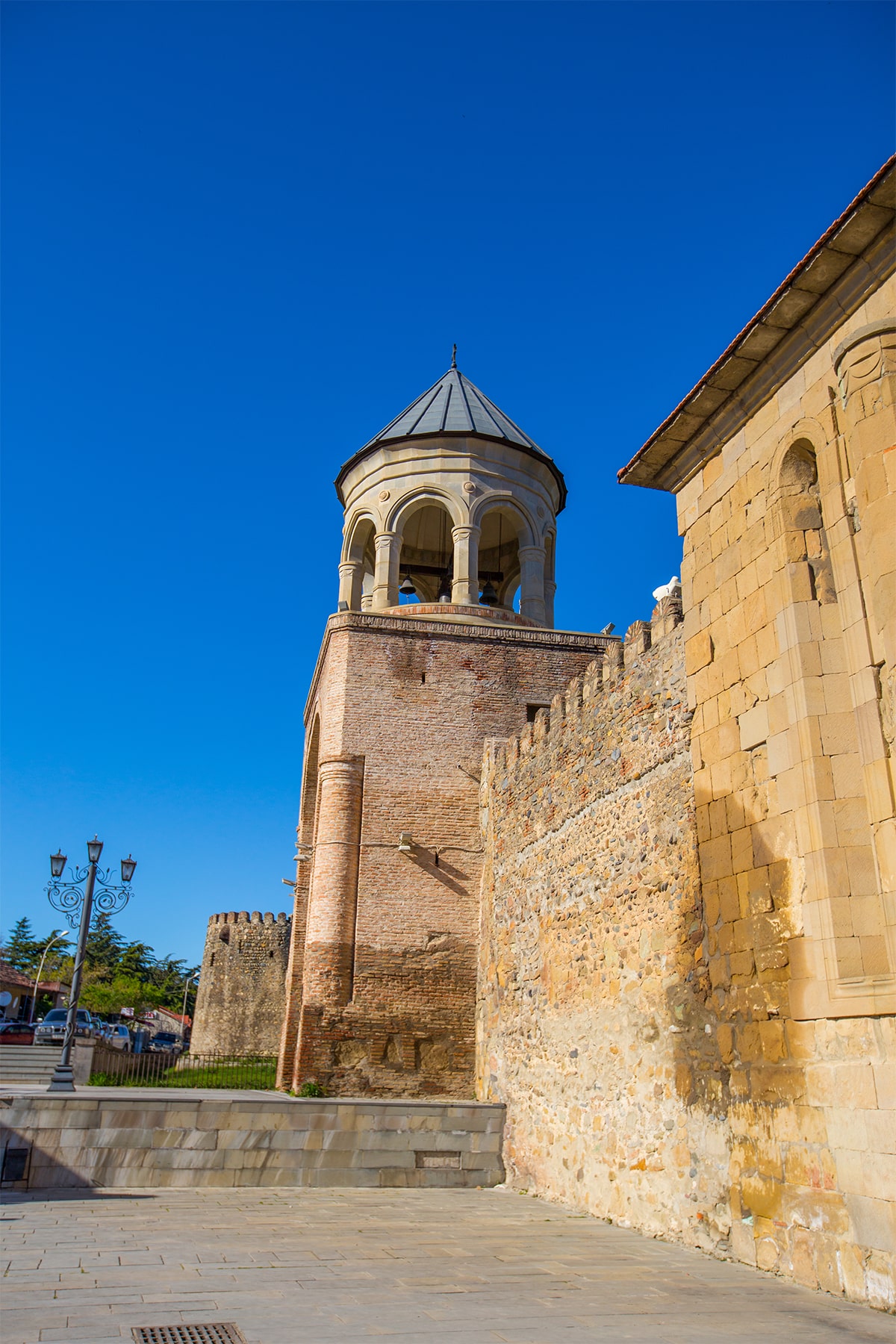 We found one shop who exclusively sold churchkela- the delicious semi-sweet and chewy walnut and grape candy. 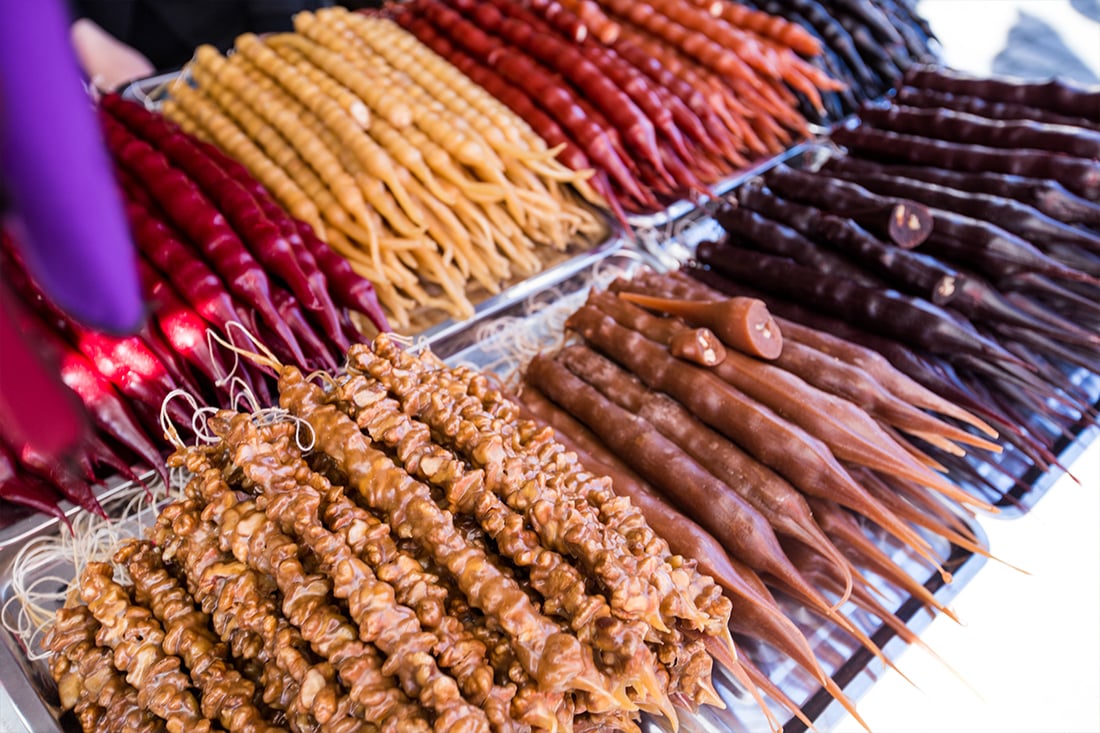 Once inside the walls of Svetitskhoveli Cathedral, you can walk around the grounds, or head inside. Women must cover their heads with scarves, and if you're wearing pants, you must wrap a scarf or apron around your pants to make a skirt- as a sign of respect. 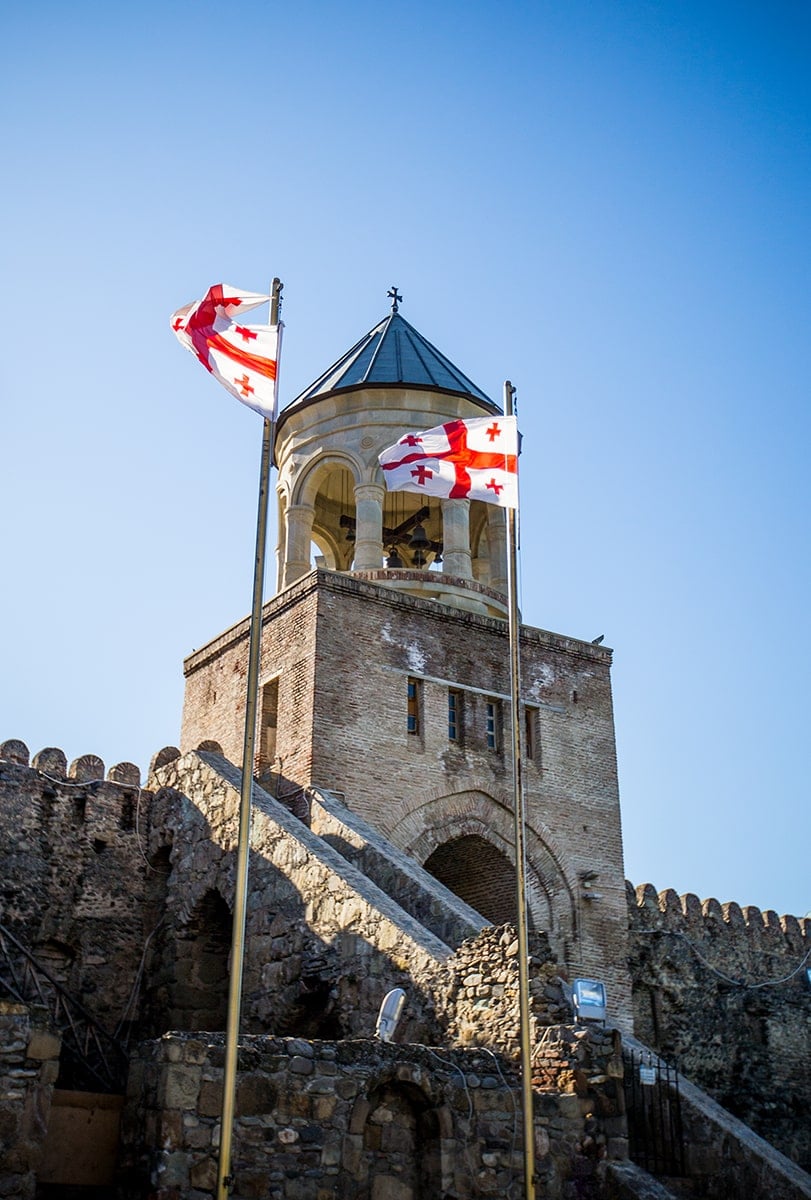 The grounds were amazing, but we all headed in to see some of Georgia's most holy relics.

Inside Svetitskhoveli Cathedral sits a pillar which is said to be buried above Jesus' robe (which a traveller to Iberia brought in the 3rd century around the time of Saint Nino). 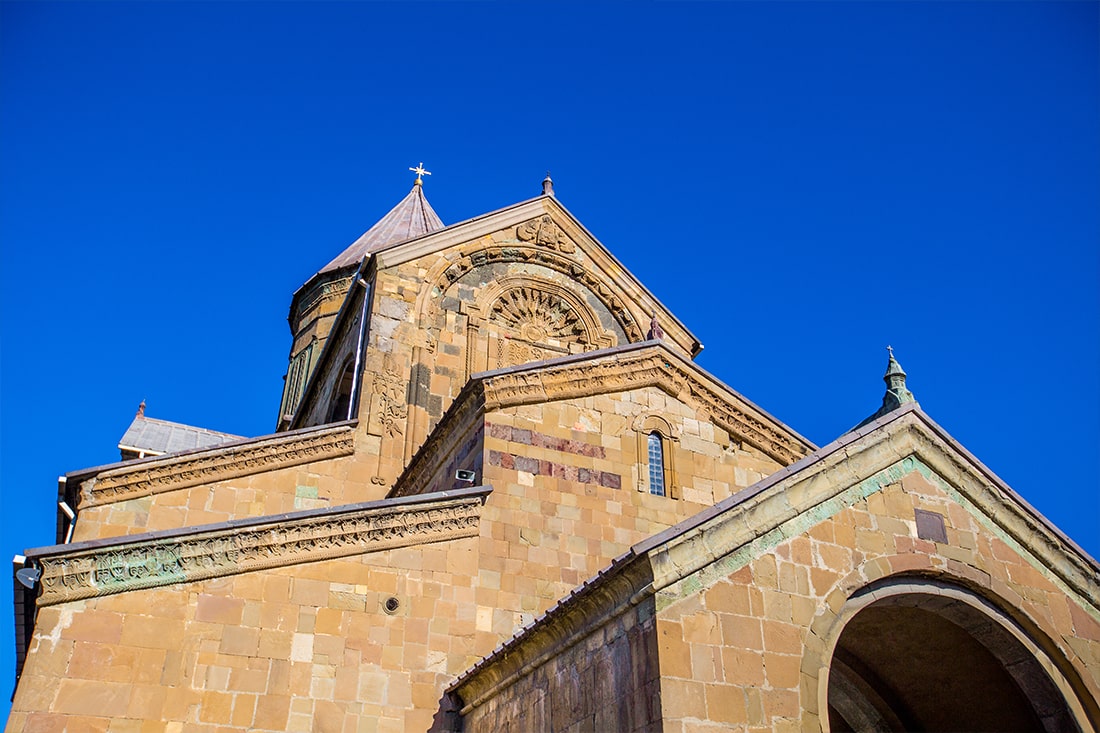 The church itself has some stones with copper in them- as you can tell by the lovely green accents in the stone. A few day later, we visited a church on the border with Armenia that was almost completely green from this stone- it is such a lovely touch! 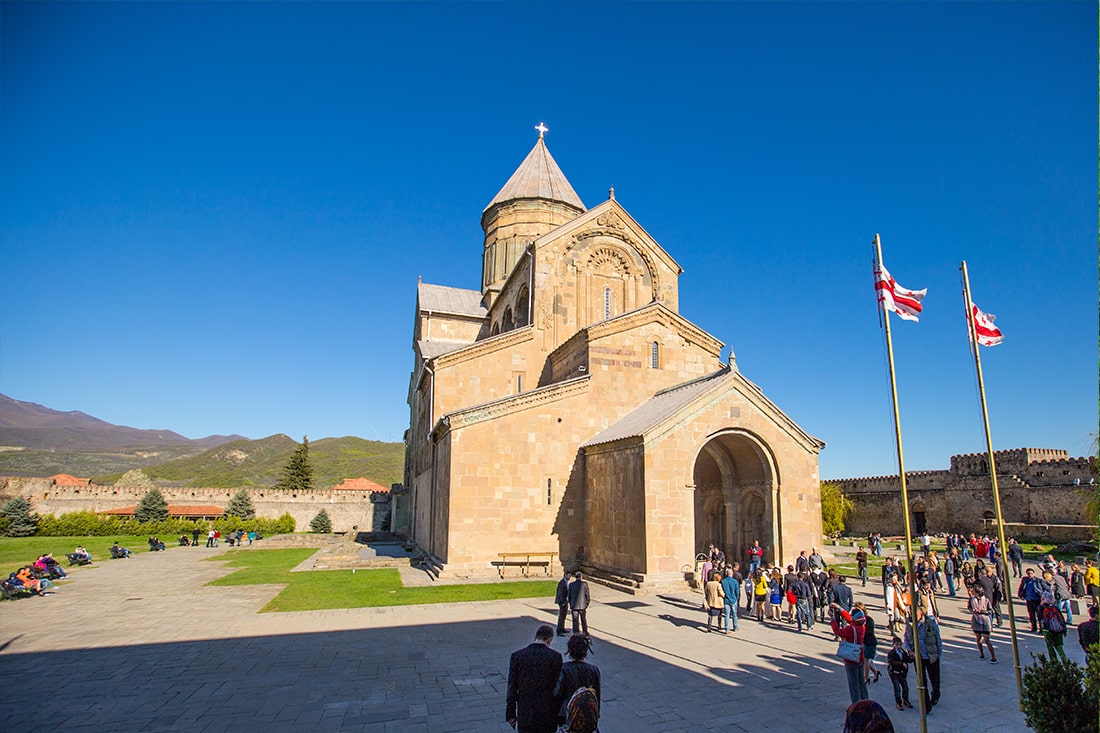 Photographs weren't discouraged inside the cathedral (just about everyone around me was snapping photos nonstop), but I was asked by a monk to not use my camera after taking this shot. I think the loud "beep beep" my camera makes when focusing (which I have since turned off) and the loud shutter were a bit distracting.

Luckily, you can get a bit of a glimpse at the ornate icons that are hundreds of years old on the walls here tough. 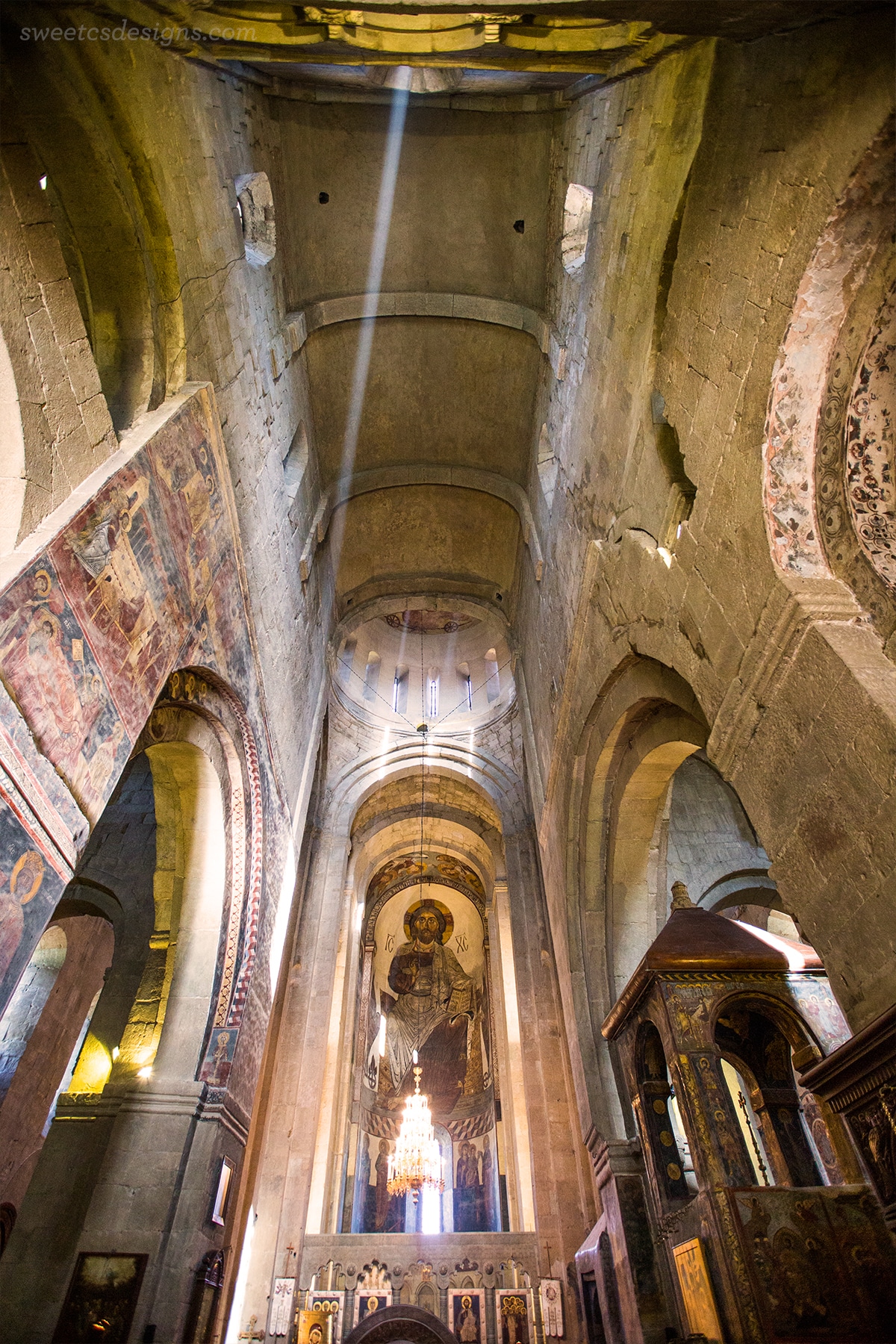 Jvari Monastery
Svetitskhoveli Cathedral, and the shops around it
Armaztsikhe acropolis which dates back to 1000BC

Grab some churchkela or homemade flavored chacha (very strong alcohol- similar to moonshine), or ice cream from one of the numerous vendors outside Svetitskhoveli.

Watch for signs on where you can photograph, and what you're required to wear.
Women should carry scarves - one to cover your head, and one to wear as a skirt if wearing pants. If you do not have a scarf, there is a basket outside of the churches you can borrow a scarf and aprons from to tour inside.
Watch out for wedding convoys that might be driving erratically- they are extremely excited and can drive a bit over the speed limit!