Heidelberg Castle, or Heidelberger Schloss, is a gorgeous Renaissance partially ruined castle that sits over the picturesque city of Heidelberg and the Nekar River. 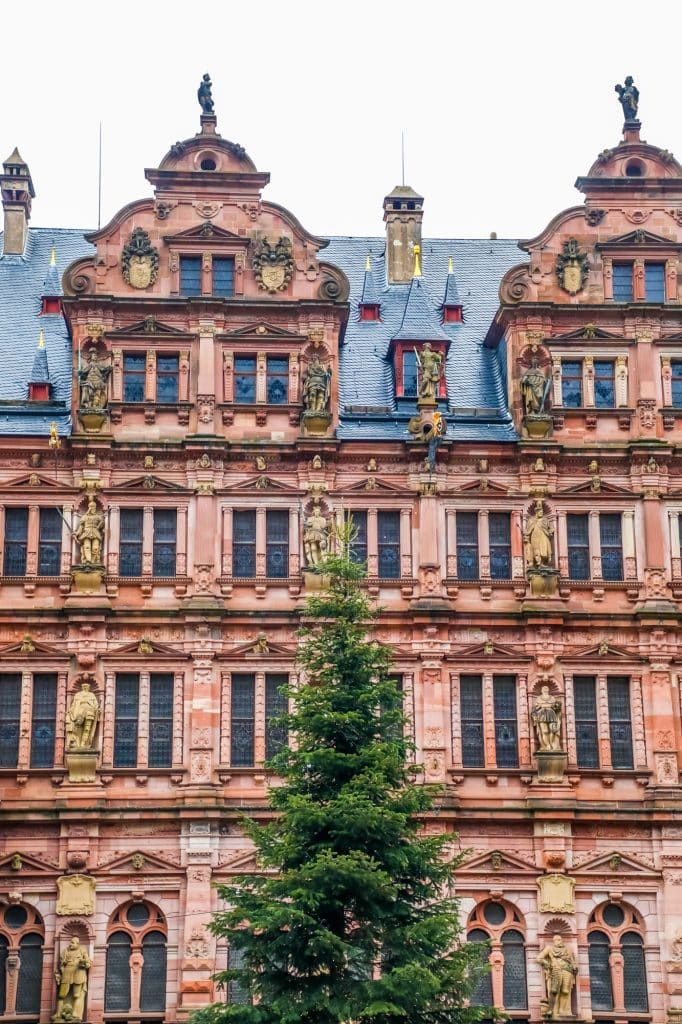 Heidelberg is a gorgeous town - rich with romantic architecture, cobblestone streets, and a glittering river's edge that has withstood so many important historical events.

When visiting Germany, there is an immense feeling of importance - everywhere you step, you feel like something momentous happened before your time. There are famous battles, World Wars, conquests, and more - all set for you to learn about as you wind through the countryside. 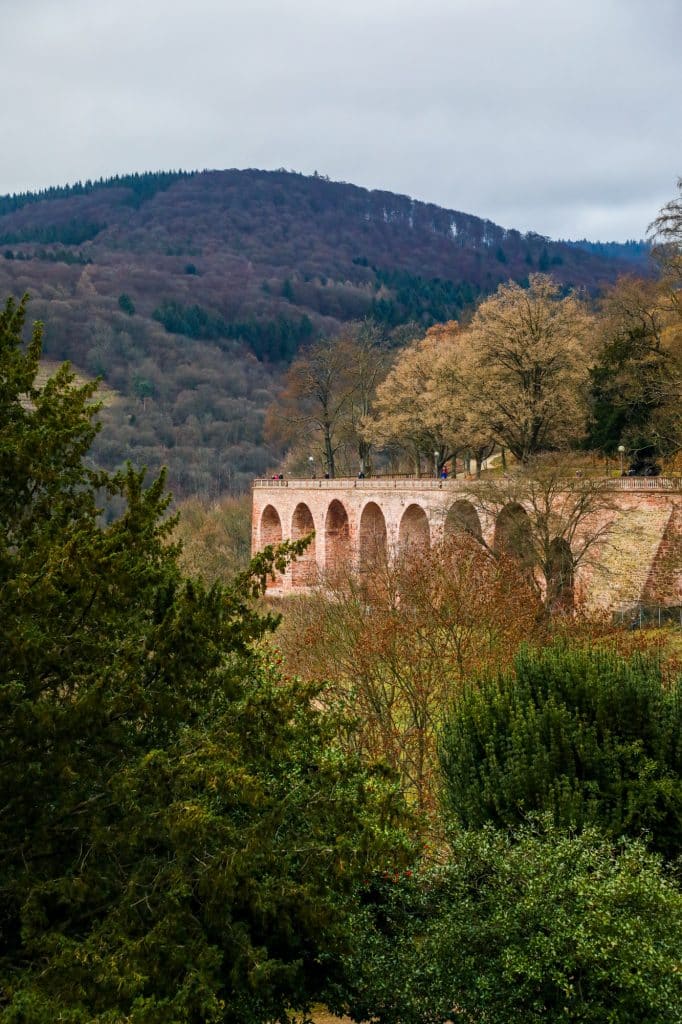 In Heidelberg, it's hard to not be swept up in the history of the town - and of the largely intact castle from the Renaissance period.

While a lot of castles standing today lay in ruins, Heidelberg is one where the grandeur of the Renaissance can really be felt - from the gorgeous grounds, to the giant wine cellar, to the balconies, and through the courtyard - it's impossible to not imagine the grand events that took place there. 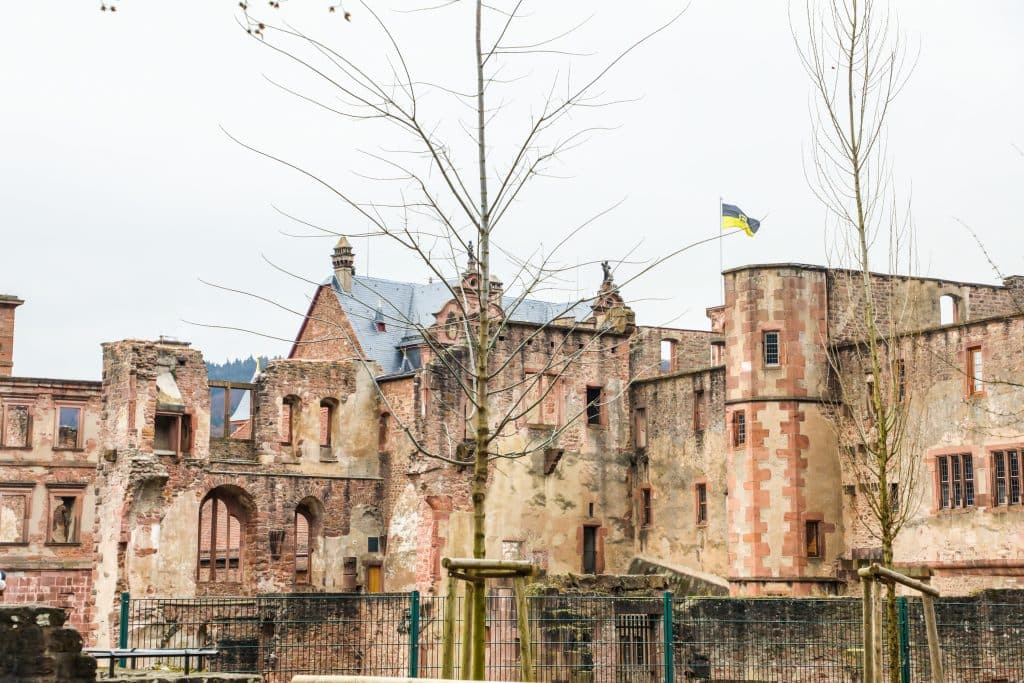 Heidelberg is also an easy castle to visit- with a good part of a tour being suitable to a self-guided tour and easily walked by people who might otherwise have physical restraints (the courtyard is most of the "tour", and is easily accessible via gentle cobblestone walks - and the grounds circling the castle (where you can view some of the interior of the ruined portions) are visible from a smooth, paved path.) 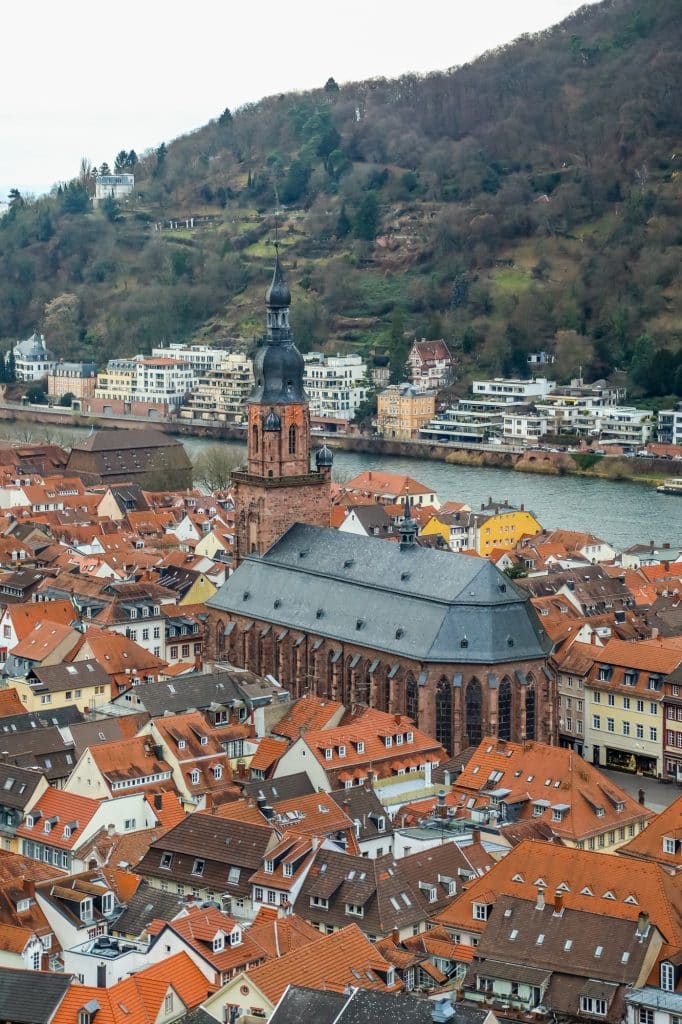 If you're interested in medieval medicine at all, there is also a pharmacy museum inside the castle. There are some fun interactive exhibits for kids where they can mix and smell herbs and take their own hand at being a pharmacist - though I will admit that it was fascinating and cool, it wasn't a huge draw for me (again though, if that is your thing, I think it would be an amazing draw and it was really well done.) 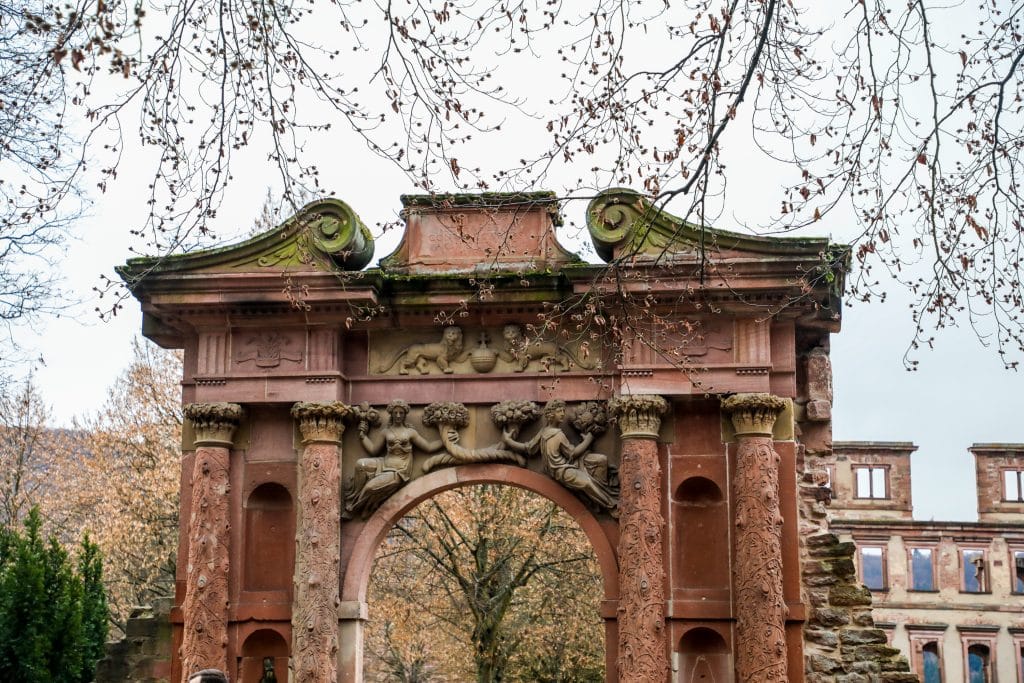 After walking through the wine cellar (which is small - but you really should climb to the top of the giant wine barrel to get an idea of just how incredibly big it is) and the pharmacy, there are a couple terraces to explore - which will reward you with jaw-dropping views of Heidelberg, Mannheim, and the Nekar river. 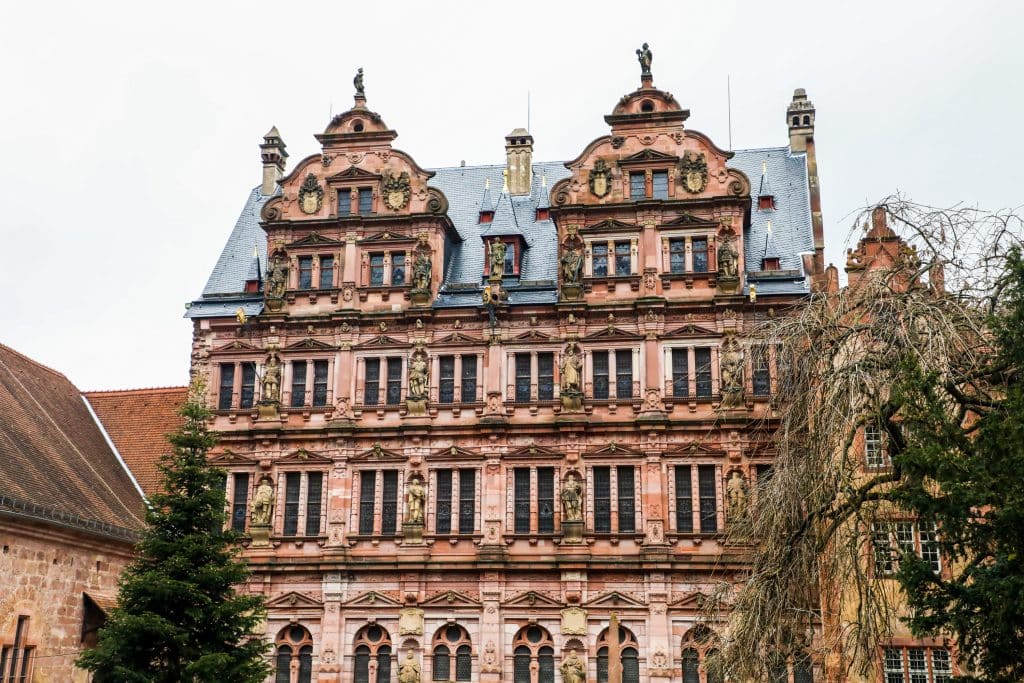 From the castle you can see all of Heidelberg - it is truly stunning and a vista that should not be missed when visiting. We went around mid day, and came down from the top of the hill at dusk (in winter, the sun sets extremely early) which made the view even more spectacular as the lights started to dance along the cobblestones.

From the western courtyard, there are a number of trails you can take through the hillside (some over the unbelievably beautiful viaduct), as well as a large number of stately gardens to explore. If you're going for a quick visit, and the castle isn't extremely crowded, you could visit everything in less than 40 minutes. If you're going for a longer tour, you could certainly make an entire day out of the castle on a longer guided tour, a walk through the hillside and gardens, or heading up the rest of the mountain to the park and fairy tale forest. 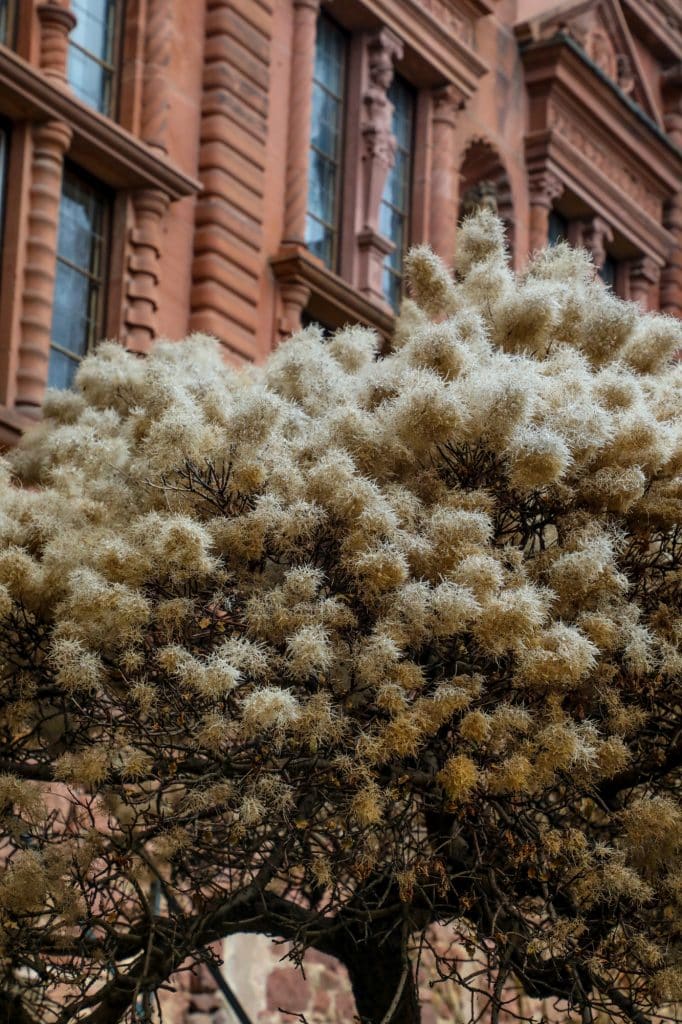 You can drive up to the castle, hike up (via road or paved trail - it is a very easy walk but is slightly uphill), or take the funicular railroad.

-Parking in Heidelberg is easier during University breaks and in the non-peak summer tourism times. Park close to the funicular for easy access to the train, castle, and old own.

-Cut Costs- Save money with a Family Pass!

If you would like go to inside the castle grounds (as well as the wine cellar and the pharmacy museum) at all, as well as the upper funicular stops, and have others touring with you, it is the most economical to purchase a family pass - it was 28 Euros for our family of four - which allowed us to go to the castle, the second highest stop, and on the smaller upper tram all the way to the top of the hill (and around the woodland fairy park at the top.) 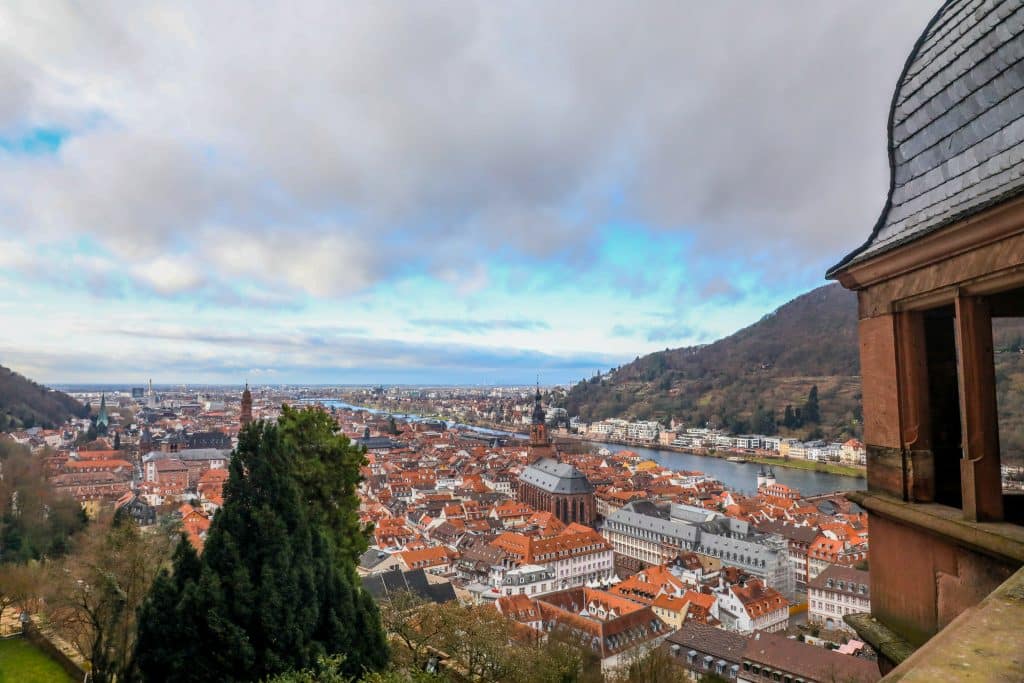 -From Frankfurt, Heidelberg is about an hour to an hour and a half south via an A road (autobahn/highway), past Mannheim and many of the Rhine valley's spectacular wine regions. The castle railway (which is not a public rail and does reqire a separate purchase) is easily accessible by train from Frankfurt and many German towns.

There are a few gorgeous castles you can stop by on the way, and lots of pretty, quaint towns nearby to explore (we stayed in Weinheim, a cottage town popular with Frankfurt weekenders) which are easily accessible by train or a short drive.

Airbnb has a number of gorgeous homes in Heidelberg as well as nearby towns (we stayed in Weinheim at the Ulner Kapelle - a former church on the town square which regularly hosts events and is incredibly gorgeous and spacious). Its a short trek from Weinheim to Heidelberg, and a bit slower pace if you want a quiet town.

There are also a number of hotels and boutique hotels in Heidelberg.